I have been watching more TV lately.  This started when I realized how much content I could download to my phone or Kindle to watch while in transit on the subway.  This was initially great!  I could immerse myself in television programming any day of the week, not just the one or two days when a favorite show came online.  I started picking entire series to watch, starting with Parks and Rec and adding Crazy Ex-Girlfriend.  I watched a huge chunk of the first season of Outlander while traveling to and from Toronto.  And I could keep watching all the weekly shows that come up in “real time” like Divorce, so long as I watched them on the above ground bus to work in NJ.

Then the TV watching time began to creep up.  I started watching episodes of TV at home, on an actual TV.  I would watch two or three episodes at a time.  Suddenly, entire hours were disappearing.  I would look up and realize I was looking at a screen still at 11pm or midnight, throwing off my sleep schedule and my body’s ability to stay asleep due to the light suppressing the melatonin production I need for a good night’s rest.  I’d make up for that with a melatonin pill, and then I’d wake up groggy and start compensating for that with caffeine.  Which, as I learned last fall, I can only consume in moderation as well.  TV is both a bad influence and a bad habit.

It isn’t as if I’m watching crappy TV even!  I’m watching a lot of consistently smart, female led, well reviewed content.  CexG , for example, is an extremely smart show, digging into its characters motivations and human frailty and mental health and changing sense of identity with a great sense of compassion and insight, sometimes expressed through musical numbers.  Parks and Rec is one of the best comedies ever, mostly based on the strength of its ensemble.  Neither show relies on gender tropes to build their characters.  Neither is based on laughing at its characters, as some sitcoms consistently do.  They are both well written, compassionate programs.  But they’re also passive content, and as long as I’m sitting there consuming the content, I’m not engaging in anything else.

Crazy Ex-Girlfriend: the only show to compare our mammary glands to the density of white dwarf stars.

It’s addicting to consume passive content.  It’s addicting to have an entire entertainment feed directly into my brain.  I have always read so much that I’m used to what Jasper Fforde called the “imaginotransference” process in the Thursday Next books.  To have multiple senses provided for me, without having to use any imagination myself, is fantastic.  It is so much richer an experience to see each nuance of a character’s facial expression, to see their setting, to hear their voice. This is why we all universally love television and movies, after all: they are a full display of storytelling that shows us a full, exacting vision, without relying on our brains to place the information in context or create our own visuals.

So as much as I try to justify my consumption of television, I also know I’m being lazy when I watch.  And I also know that as long as I”m watching, I’m not creating anything of my own.  I’m not blogging or writing.  I’m not practicing piano.  I’m consuming someone else’s creation, and as smart as that creation may be, the only good it does me is to be entertained by it.  I’m not thinking my own thoughts when I’m consuming passive content.  Sometimes, that’s OK, because I need a break and it’s nice to be entertained and heartwarmed by someone else’s vision of, say, Pawnee, IN: a place full of hope and positivity.  Other times, it’s just consumption, and it’s just taking up my time…and, to an extent, my energy.

Am I judging passive content?  No.  I’m judging how easy it is to be passive when consuming media.  With the infinite access to entertainment that is Netflix and its counterparts, one can access the cream of the art form of TV, the best comedies that are out there.  Even those of us with very specific comedic preferences (“Female Driven Sitcoms With Women Who Swear A Lot“) can find hundreds of hours of our preferred content on these platforms and watch those hours all at once.  Yes, I’m sure passive TV watching happened before this, but it didn’t happen to me.

I have to figure out more balance in this area.  Still, I enjoy watching these shows.  I’ve rarely watched much TV.  Doing so now opens up my ability to participate in more conversations around what makes a good vs. bad piece of video content.   And it’s also given me a whole new respect for the writers who make their visions happen in the long run. 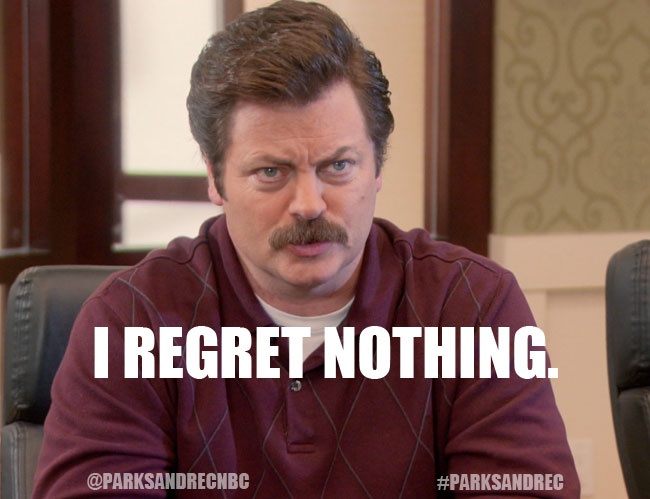 This entry was posted in mental health, thoughts, tv, wellness. Bookmark the permalink.