the subway is the great equalizer in NYC

I love the New York City subway.  This may come as a surprise.  Our system is falling apart – literally in some cases at the switches.  Hellish delays happen due to garbage spills.  No one will take responsibility for funding and doing real work to fix the actual problems.  And of course, it is full of rats.

Yet for all that, I love the subway.  It is the most efficient way to get around most of the city.  It’s faster than driving most days.  It doesn’t cover the entire city, but I can use a $10 car or taxi to get from a subway stop to a final destination in a hurry if I don’t have time to walk.  And it has stunning views from some of the trains 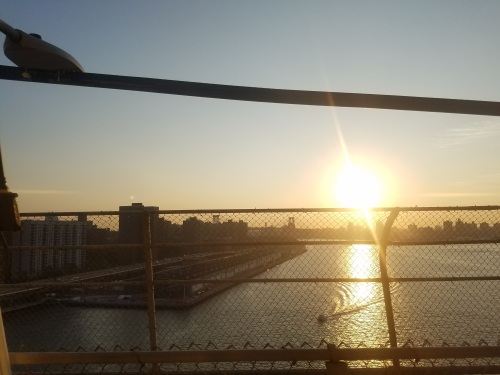 Most of all though, the subway is the great class equalizer of New York.  It eliminates the class-based pretension and consumption of cars in most New Yorkers daily commutes.  Everyone takes the subway.  Even for those who can afford car service, taking a car would waste more time than it’s worth.  In a society where time is money, the subway is not only a financial bargain, but a time bargain for those who would otherwise have automobile based transportation.

The subway also provides the same service to everyone, regardless of class and social status.  There’s something very socialist about it, a service where you cannot buy your way out of it, or pay for better quality experiences than anyone else.  A New York resident may own a $5MM townhome in Brooklyn, or be renting an illegal divided apartment in Queens, and they will still have the same experience on the train that day.  That may be a quiet ride across boroughs, or it may be a crowded train car that has been overloaded after being delayed by twenty minutes due to a sick passenger in Times Square.  Whatever.  No one can buy their way out of it because no other transportation form is more efficient and effective in New York.

And while I may complain about the homeless literally peeing inside the train cars, the subway must literally save lives in cold weather.  The stations are underground, the cars are climate controlled – it isn’t where people should have to go, but it is a roof over their heads and a way to not freeze to death. (It would be nice if the Mayor opened more shelters though so the subway could be used for transportation and not as an inclement homeless shelter though)

The subway is what works for this city – and what makes this city work.  It keeps New York running.  Millions of people ride it every day.  It sucks a lot of the time, and complaining about the MTA is practically a mandate.  Yet the subway equalizes the experience of living here in a way that makes the middle class and the wealthy care about a transportation system that also serves the poor.  My socialist heart beats a little faster for that.

This entry was posted in nyc. Bookmark the permalink.