To date, we’ve been pretty lucky with Ben and eating. This is because when he was very small, our pediatrician gave us the Best. Advice. Ever: “just put the food in front of him”. So we did. And we kept putting it in front of him. I read somewhere that a kid has to try a new food at least five times before they will eat it, so we just kept trying. Now, Ben will taste almost anything new, even if it takes months for him to actually eat it, and we have managed to get him to eat a fairly good variety of fruits and vegetables. He eats vegetables with hummus (usually carrots, cucumber or celery) most nights as an “appetizer” before dinner. And he will eat ANYTHING that is fruit based. Berries, apples, bananas, oranges, melons, peaches…if its fruit, even a new fruit, he will eat it.

Obviously, this makes meals easier. Having Ben accept and eventually eat new foods means that we prepare one meal for everyone, with no substitutes, most of the time. We used to give him frozen mixed vegetables at almost every meal, with the green beans picked out, instead of whatever “adult” vegetable we were eating. Now, he eats the green vegetables we eat: broccoli, asparagus, green beans. I still cook a limited variety of those green vegetables to keep it to the Big Three above, or related varieties (broccolette, for example), but mostly, I can cook a meal with a protein, whole grain, and vegetable, and serve it to the kid, and have him eat it with minimal fuss. We have even been able to get him to eat vegetables when they show up in food outside the home, like when he got bok choy in his dumpling soup.

This isn’t to say Ben doesn’t prefer the usual “kid food”: the basic sweet or salty foods all kids eat. He would much rather live off granola bars and cheese sticks, fries with ketchup, grilled cheese, Mac and cheese, chicken nuggets, pasta, etc. He is never going to turn down candy, especially M&Ms. He still wants nothing to do with a lot of foods, like sweet potatoes, and it’s tough to get him to eat more than a few bites of non-fried fish that isn’t salmon. But overall, he is pretty good about eating whatever healthy food we put in front of him. With the nutritional problems that run rampant in Western society these days, and a 30% child obesity rate in America that is partially linked to “kid foods”, this makes me extremely thankful to have a little boy who will eat more than the usual monotone of junk designed for a “child palate”.

So we are fortunate here, because Ben is an agreeable kid. But I still wanted his vegetable repertoire to expand. So I picked up “French Children Eat Everything”, a book by a Vancouver academic who moved to France for a year with her two small daughters, and had to adjust to the French “food rules”. Rules like “kids eat what the adults eat” and “slow food is happy food”. Those are rules I can agree with. Also, obviously, I want one of those Euro-trained kids who will go to a nice restaurant and eat a multi -course meal. Mostly though, I just want a kid who eats a healthy variety of food, including the vegetable based foods I think are delicious, like beet salad with goat cheese, or roasted Brussels sprouts, or collard green wraps with avocado or hummus.

So I ramped up the food introductions last week, through a variety of tactics. We got Ben to eat lettuce based salad, a food he previously said he “didn’t eat “, by introducing it to him with ranch dressing, and then rolling to vinaigrette. On Sunday, he tried the lentil and carrot salads on offer from a bistro’s food booth at the 5th Ave Street Fair, and he ended up eating several bites of each. And last night, I took a literal page out of “French Kids” and cooked one of the recipes: beet purée. But I cooked it because, when we were in the grocery store Sunday night. Ben pointed at beets and asked, “What’s this, Mama?”. I explained it was beets, and he told me, “I would like to try that.”. Of course, he didn’t eat more than two bites of the resulting dish, which was actually delicious, since it was really a puree of three parts zucchini and one part beet, with butter and salt added. But he tried it, and I will keep trying it on him and hope he develops an eventual taste for beets.

One of the most successful tactics to date, however, has been leveraging screen time. I used Ratatouille as an introduction to, well, ratatouille. I used a Sesame Street segment about colorful foods to bring in more colorful vegetables. And now, our new favorite show is Around the World in 80 Plates. Ben likes “cooking” (standing on a stool to help prep simple foods with Paul), and I figured a cooking show that goes around the world would be a great way to learn about cultures AND introduce new foods. This is actually working, because after watching last week’s episode in Lyon, France, he wanted to go shop for and cook the foods we saw on the show. So we went to the farmers market on Saturday (by bike, naturally) and bought the ingredients for salad Lyonnaise: 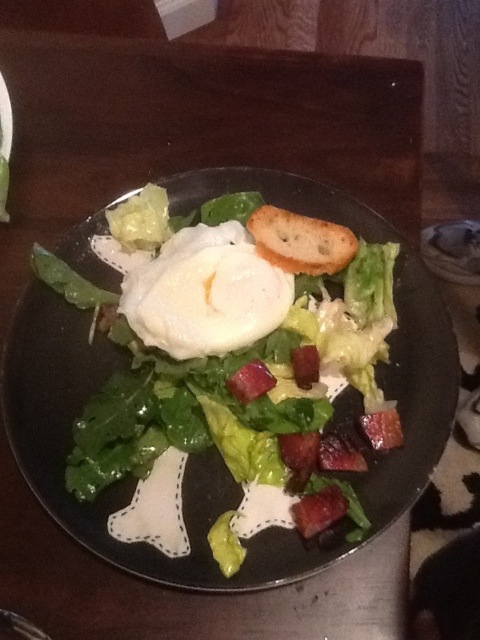 That is Ben’s salad, above. I rendered duck prosciutto (instead of slab bacon) in a bit of olive oil, and poached the eggs. Ben shook the dressing, made from the rendered fat and red wine vinegar, and the assembled the salads after I tossed the arugula with the dressing. We all then broke and mixed in our egg yolks, and Ben actually ate half his salad.

This tactic of involving Ben in cooking doesn’t always work. Ben still refused to eat the mussels he helped me prepare. Or rather, he ate one, announced he did not like it, and so I quickly cooked him some plain fish as a protein substitute to go with the fries I made to accompany said mussels. But that’s OK. The point is that he ate the mussel before saying he did not like it. He tried a spoonful of beet purée last night before dismissing it. He tastes things, and then talks about how it tastes. Like we did with broccoli, we will get there with other foods. We will just have to keep offering these foods to him, along with foods he already knows and likes, and remind him that every food was, at one time, a new one he didn’t know he enjoyed.